5 Weekend reads in robotics, drones and their economic impact 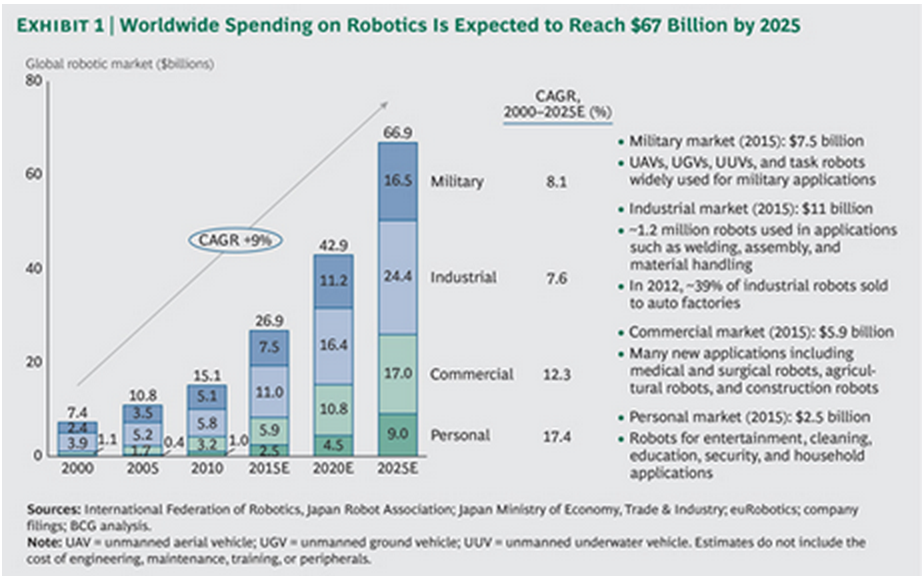 This may sound crazy. This may be crazy. But Google is getting serious about sending packages flying through the air on tiny drones. And this is how that happened.

Summarizing what is going on in a video is another task that may soon be done automatically thanks to work done through the Video In Sentences Out study. Using artificial intelligence deep learning methodology, a team has already been able to achieve accurate results in almost half of the videos the system has examined.

The American Federal Aviation Administration predicts that in forty years’ time, some 40% of air cargo will be transported by unmanned aircraft.

Artificial intelligence must be possible. What’s holding us up?

The field of ‘artificial general intelligence’ or AGI — has made no progress whatever during the entire six decades of its existence. Despite this long record of failure, AGI must be possible.

Think of all the economic activity around you on a day-to-day basis, things that may seem commonplace but nevertheless require a great deal of coordination and ‘work.’ Ms. Rifkin who owns the local flower shop gets her delivery of tulips, Mr. Friedman’s insurance claim for his colonoscopy is processed, petrol stations have their pumps replenished over night so the millions of drivers on our roads can refuel on their way to or from the hundreds of thousands of different office locations, retail stores, factories and warehouses where they complete a myriad of professions. Look outside your window and you will have an idea of just how the global economy is a marvel of complexity, people talking on mobile phones, wearing clothes, shoes and make-up made on the other side of the world.

Now think about how many of the world’s professions have been or could be replaced by automation or robotics. It is highly probable that we will “see robots doing the jobs of humans in manufacturing plants (it is already the case), in grocery stores, in pharmacies, driving cars and making deliveries.”

But it is also highly probable that much of the work robots will do… will actually augment human labor not displace it. MIT professor of economics, David Autor believes the media vastly oversells the degree to which technology will displace highly skilled workers. He believes changing technology will instead complement these workers’ skills and help them to become more productive. In a new paper that accompanied Autor’s speech at Jackson Hole last Friday he actually reflects: “on how recent advances in artificial intelligence and robotics should shape our thinking about the likely trajectory of occupational change and employment growth.” (RobotEnomics emphasis added).

Autor considers the oft quoted meme that the “robot overlords” will soon take our jobs, and asks:

But where are these robot overlords? And if they are not here already — and all outward appearances suggest that they are not — should we expect their imminent arrival?

The main thesis of the report is that whilst automation and robotics can do the work of routine tasks it is far more difficult for robots to complete non-routine tasks:

Executing non-­routine tasks is a central obstacle in computer-based automation.

Referring to Amazon’s acquisition of Kiva robotics Autor refers to the fact that Amazon still needs thousands of human’s in their warehouses:

These warehouses employ legions of dexterous, athletic “pickers,” who run and climb through shelves of typically non-­‐‑air conditioned warehouses to locate, collect, box, label and ship goods to purchasers. There is at present no technologically viable or cost-­‐‑effective robotic facsimile for these human pickers.

The job’s steep requirements for flexibility, object recognition, physical dexterity, and fine motor coordination are too formidable (for robots or automation).

But large components of warehousing can be automated as Amazon’s Kiva systems shows. However Autor emphasizes humans and robots working together in these warehouses:

The report highlights the fact that machines need clear goals or instructions, whereas humans can operate with flexibility and judgment:

Humans naturally tackle tasks in a manner that draws on their inherent flexibility, problem solving capability, and judgment. Machines currently lack many of these capabilities, but they possess other facilities in abundance: strength, speed, accuracy, low cost, and unwavering fealty to directions.

The author indicates that even with advances in machine learning his: “general observation is that the tools (automation, soft A.I.) are inconsistent.”

Whilst acknowledging that there could be breakthroughs in technology (I think the author should have looked closer at Google’s DeepMind), the principal conclusion from the report is “that the challenges to computerizing numerous everyday tasks — from the sublime to the mundane — remain substantial,” and therefore robots will not be taking millions of jobs any time soon.

Outlining jobs where wages have stagnated and also those that the report author believes cannot be done by robots he concludes with the belief that robots and humans will collaborate and complement each other in the workplace (see also Human-computer symbiosis, not Artificial Intelligence, will spur new jobs):

He calls on governments and institutions to increase investment in training and education that produces skills which are complemented rather than substituted by technology. A point echoed by the European Union Commission who state: “More than 20% of GDP would quite simply disappear from Europe without intensive use of advanced robotics.” And that intensive use of robotics requires people skilled in building and working with advanced technologies. As I’ve said before – it’s a good time to join the robotics sector…

H/T William Rineheart and Andre Montaud for alerting me to Autor’s paper.

The world and its ageing workforce needs Robots 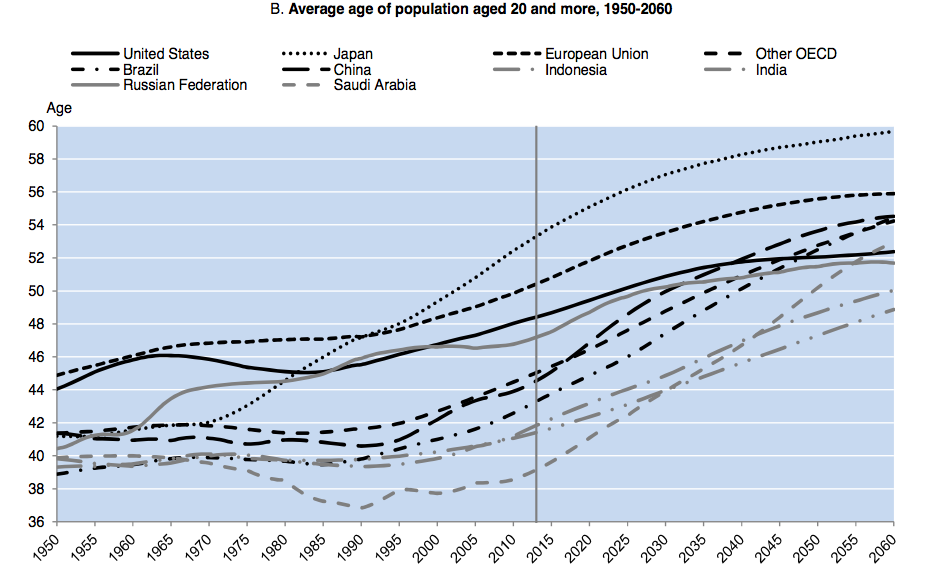 An OECD report: Policy challenges for the next 50 years indicates: “Over the coming decades labor forces will age substantially.” “Population ageing will result in a decline in the potential labor force… causing a negative labor supply.” They then ominously add:

An ageing workforce and longer working-lives will mean a longer period where depreciation of skills and technological change risk making human capital obsolete.

Another report by Moody’s quoted in the Financial Times states:

The world will have 13 “super-aged” societies by 2020, up from just three today, according to a report that warns of ageing populations becoming a drag on global economic growth.

Most of the countries set to join the “super-aged” club by 2020 are in Europe and include the Netherlands, France, Sweden, Portugal, Slovenia and Croatia. But by 2030 they will be joined by a more diverse group including Hong Kong, Korea, the US, the UK and New Zealand. In the meantime, more than 60 per cent of the countries rated by Moody’s will be “ageing” next year, where 7 per cent of the population is 65 or older.

A report by CPB Netherlands Bureau for Economic Policy Analysis, Roads to Recovery posits that by 2023 the ageing population will have a negative effect on the economy:

Potential growth of employment first of all depends on population growth, in particular, the growth of the working-age population. Due to the ageing of the population, this growth has come to a halt.

Robotics technology has significant potential to impact on the societal challenges concerned with the ageing society. An ageing population will see declining productivity. However as reported by Morgan Stanley in their publication; The Internet of Things is Now:

Widening use of robots may be a welcome solution to one of the consequences of global ageing. Over the next 30 years, the number of people aged 20-64 years will decline in countries such as China, Japan, Germany, and Russia. By increasing the use of technology, companies can optimize productivity, thus helping to offset some of the headwinds of lower labor supply and higher wage inflation that are likely to emerge over the next 20-40 years.

Robots provide a preventative benefit to counterbalance the ageing process. The UK Government recognized the importance of robots to an ageing society in their report, RAS 2020: robotics and autonomous systems:

In the future, we will increasingly use Robots and Autonomous Systems to enhance almost every aspect of our lives. They will be part of our response to national challenges: an ageing population, safer transport, efficient healthcare, productive manufacturing, and secure energy.

Human history has always been characterized by technological advances to help society. Roboticists recognize that robots need to offer gains in productivity and support to justify an investment. The ageing society provides a strong imperative to develop robotic systems.

With an ageing population it may be plausible to think instead of robots replacing jobs; robots will actually mitigate the expected economic strains caused by the demographic changes ahead.

On the back of two major speeches and papers by leading economists 3 solutions are outlined to head off the threat of being displaced as a result of advances in robotics and automation.

Larry Summers recently wrote: “Looking to the future, my guess is that the main story connecting capital accumulation and inequality will not be Piketty’s tale of amassing fortunes. It will be the devastating consequences of robots, 3-D printing, artificial intelligence, and the like for those who perform routine tasks. Already there are more American men on disability insurance than doing production work in manufacturing. And the trends are all in the wrong direction, particularly for the less skilled, as the capacity of capital embodying artificial intelligence to replace white-collar as well as blue-collar work will increase rapidly in the years ahead.

One of Larry Summers Harvard colleagues, the economist Professor Richard Freeman, a leading labor economist who also directs the National Bureau of Economic Research, presented a paper in early May with the title: Who owns the robots rules the world.

4 Weekend Reads: Robots – you don’t want one to fall on you

Humanoid robots are nowhere close to having the “brain” and motor control of a human VIDEO: The smartest people in the world have spent millions on developing high-tech robots. But even though technology has come a long way, and will advance further still through the DARPA Robotics Challenge, humanoid robots are nowhere close to having the “brain” and motor control of a human. Why is that? MIT+k12 Videos takes a look behind the motor control processes in the human brain, and explains how cutting-edge research like that taking place at the MIT School of Engineering and CSAIL – MIT is trying to implement it in robots. Helios, MIT’s Atlas robot for the DARPA challenge plays a starring role. (MITK12 videos) Building Robot Companions for Children Some day, robot “personal trainers” will teach kids to speak, read, exercise and eat their vegetables, say Yale researchers. A $10 million federal grant is funding the five-year project. “The need for this technology is driven by critical societal problems that require sustained, personalized support that supplements the efforts of educators, parents, and clinicians.” (The Washington Free Beacon) Robots need to be able to effectively sense and navigate whatever might be thrown at it “Robots need to get less expensive, lighter (you don’t want a robot that weighs 300 lbs to fall on you), and softer in case they make unintended contact. But even if you gave me one of those tomorrow, we would still have to do research on how to make it do useful tasks.” (Robotics Industries Association) Hat tip: Andre Montaud. The technology and jobs debate – we can learn a lot from the 1960’s Economists, struggling to disentangle the effects of technology, trade, and other forces, don’t have a certain answer to the question of whether this time is different. David Autor, an MIT economist who is one of the leading researchers in the field, argues that trade (imports from China and elsewhere) has increased unemployment, while technology has reshaped the job market into something like an hourglass form, with more jobs in fields such as finance and food service and fewer in between. (Wilson Quarterly)